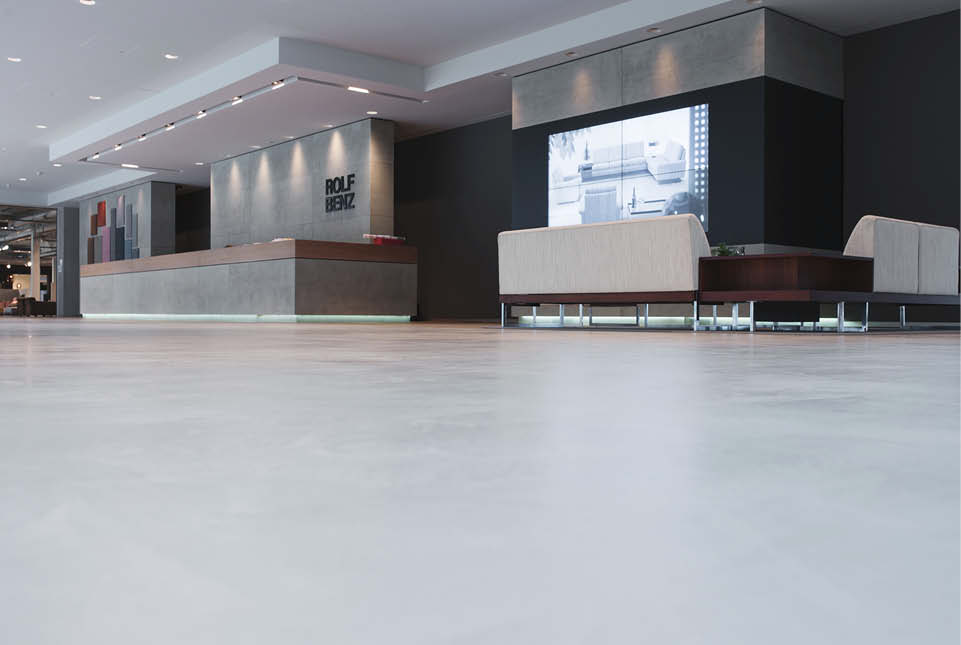 Ardex Pandomo K2 graces this lobby at the headquarters of Rolf Benz, a high-quality German-made furniture company based in Nagold, Germany.

A thin-set topping or microtopping is sort of like icing on a cake. It can go on thick or thin and be colored all the way through or just on the surface. The topping can be shaped to resemble decorative items. And, aesthetics aside, it can protect the surface beneath it.

In the concrete world, microtoppings can save money by allowing a surface already in place to be restored. They can rejuvenate cracked, chipped or plain surfaces. Their ability to mimic items such as stone or tile is yet another reason why contractors won’t stop using them.

“With the right application technique it can look like a piece of granite, a piece of marble or wood or stone— just about anything you can imagine,” says Glenn “Buster” Osteen, technical director of McKinnon Materials in Tampa, Florida. And you can do this without increasing the cost per square footage, he adds. 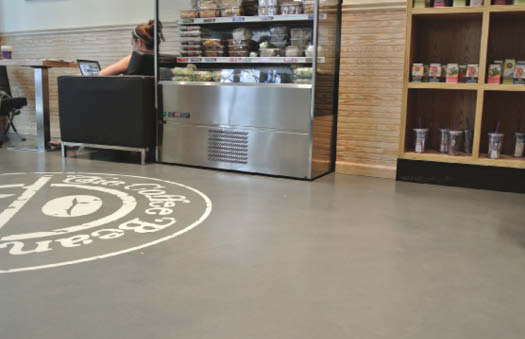 Dominick Cardone of Diversified Decorative Finishes in Brooklyn used Duraamen’s Skraffino concrete microtopping in The Coffee Bean, a New York City coffee shop. The floor was integrally colored with a custom blend of Duraamen’s Colorfast and coated with a clear water-based epoxy, followed by two coats of a water-based matte polyurethane with 240 mesh nonskid additive.

Is there a difference between thin toppings and microtoppings? The materials are used in the same way, but the description is defined by their thinness.

“Thin toppings” generally refer to cementitious overlays applied at a depth of 1 inch or less, sometimes as thin as 1/16 inch, over an existing slab. While they look like regular concrete, they’re not — the regular variety has no strength when applied that thin. Thin toppings can be troweled on, broom-finished or applied with a squeegee.

Microtoppings do not “flow” because they are so thin, so they aren’t considered self-leveling. Self-leveling toppings generally require at least 1/4-inch material and are poured into place. Microtoppings can be as thin as 20 mils (.02 inch) and applied in several coats to achieve a textured troweled look. Most microtoppings are not polishable.

Victor Pachade, general manager of Duraamen Engineered Products Inc., based in Cranbury, New Jersey, says there is no difference between the two phrases, however, the term “thin-set” is widely used in the tile industry. 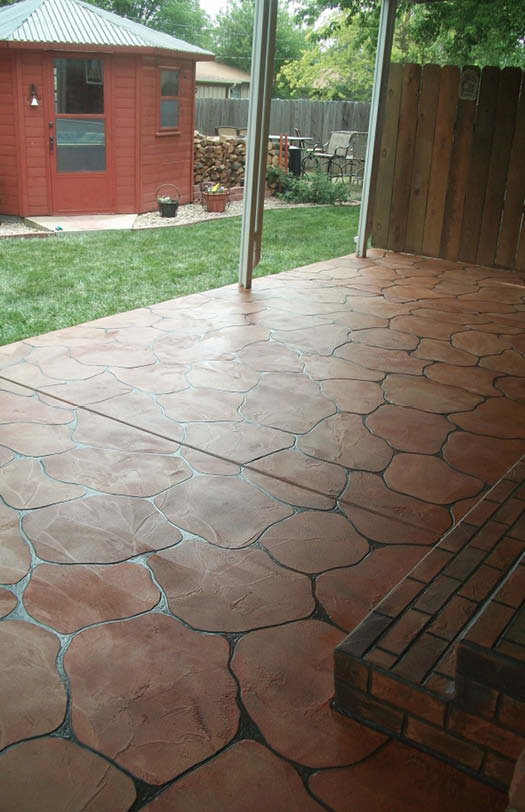 McKinnon’s McKrete overlay is an acrylic and epoxy cementitious material that can be installed on existing concrete in a wide variety of stencil patterns and colors.

“Concrete microtoppings or concrete overlays are extensively used in the decorative concrete industry,” he says. “A thin-set topping is usually less than 1/8-inch thick after two or three coats. Each coat is about 1/16-inch thick.”

Scott Balch, with Texas Bomanite in Dallas, says these products can be installed anywhere the substrate is structurally sound and the desired finish is a concrete look. “We have overlaid pool decks, patios, residential driveways, interior residential floors, commercial entries and commercial floors,” he says. “They can be used in either new construction or remodel work.”

Many toppings, like the McKrete overlay system from McKinnon, are acrylic-modified cements, which infuse cement with polymers to increase flexibility and strength at incremental thicknesses. Acrylics bond well, provide strength and have a superior weather-resistance, says Osteen.

“Microtoppings have been used ever since the 1970s for interiors and exteriors,” for everything from waterparks to parking garages, says Osteen. He can’t think of anywhere McKrete isn’t suitable.

Preparation is key
Bart Sacco, owner of Kingdom Products, a manufacturing company based in Scranton, Pennsylvania, prizes microtoppings for restoration of concrete that’s past its prime. But success in their use comes with not skimping on surface prep.

“Surface prep is key to any of these applications,” Sacco says. “You have to grind the surface to about a CSP (concrete surface profile) 2 and make it porous. Microtoppings will not stick to a highly polished floor.”

And if end-users mix the specified amount of water with the powder, they’ll get the same consistency each time they use that product, he says.

While a two-component system allows for more flexibility, it also requires that the installer be more skilled working with the material and be able to adapt it depending on the environment.

For instance, Sacco says, installers in a Southern region don’t need the polymer concentration they need up North because the South doesn’t experience such harsh winters and as much freeze-thaw action. They can get by with a higher dilution rate.

Both one- and two-component systems can easily be colored, either integrally or topically, using different types of acids or stains, says Pachade. “Use of integral powder gives the effect of variegated colors, whereas liquids give more uniform colors.”

As far as aggregates go, small aggregates like fine sand are suitable for use in microtoppings. Larger aggregates cause problems but are possible in limited quantities. Pachade says his company is developing some techniques where users can broadcast fine glass aggregates and create interesting looks by spraying the microtopping. 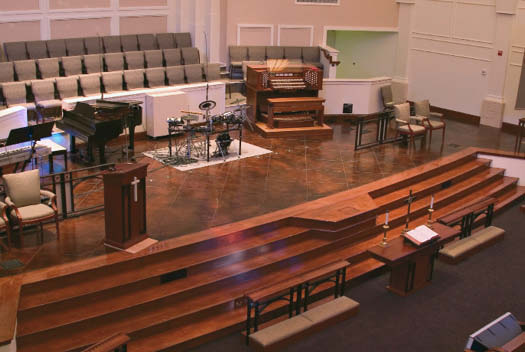 Scott Balch of Texas Bomanite installs microtoppings anywhere the substrate is structurally sound and the desired finish is a concrete look.

Thin as a dime

Bob Seman of Seman Floor Leveling Systems in Washington, Pennsylvania, about 20 miles south of Pittsburgh, is one of only 25 LevelMaster Elite Installers, the highest classification of trained installers bestowed by Ardex Americas.

“I like the Ardex SD-M because it is really quick to use, it comes in white or gray and goes down in two or three coats that are about the thickness of a dime,” Seman says.

The coating also has a hand-troweled look, which is a big plus, he adds. But probably the attribute he likes most is SD-M doesn’t add height, which is very attractive for areas that must be accessible to the handicapped.

Texas Bomanite’s Balch says microtoppings should only be installed where vehicular traffic is light as they won’t hold up in heavy traffic. They also require a sealer.

“These systems are protected by a topical sealing system,” he says. “If the end-user is not committed to maintenance of the sealers, the overall appearance will not hold up” and its life will be cut short. 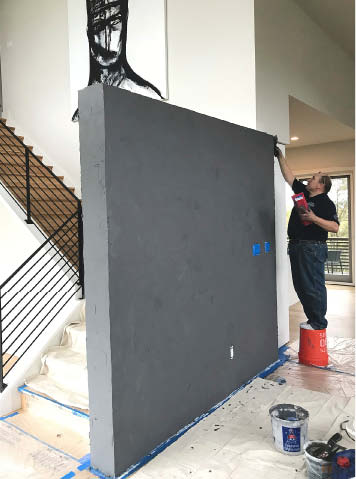 Ardex Pandomo K2, which can only be applied by certified Pandomo Elite Installers, is the microtopping on this wall. The installer used a stone oil finish to complete the look he was going for. Photos courtesy of Seman Floor Leveling Systems

At home on walls or floors
For one recent job, Seman had a high-end client who wanted to match a wall covering to a painting. He used Ardex Pandomo W1, a self-drying, trowel-applied finishing compound for walls and ceilings, to match the color, texture and motion of the painting on her walls.

“Her walls were a very crisp white and she had a big painting done in a charcoal black with an odd vertical motion,” Seman says. “She wanted the same motion in the finish on her wall and she wanted the color of the wall to match the color of the background of the painting. And we were able to do that. She stood there while I was troweling so she could see the different designs that I could do.”

That versatility and ease of use is why people continuously reach for microtoppings, whether for walls or floors, Seman says.

Brian Raub, a SureCrete installer with Brinycrete Decorative Concrete in Lafayette, Indiana, likes the workability of SureCrete’s microtopping products. About 90 percent of his business is wood-look floors and hand-carved flagstone patterns.

“I use the cracks on cracked patios and sidewalks for the patterns of the flagstone,” he says. 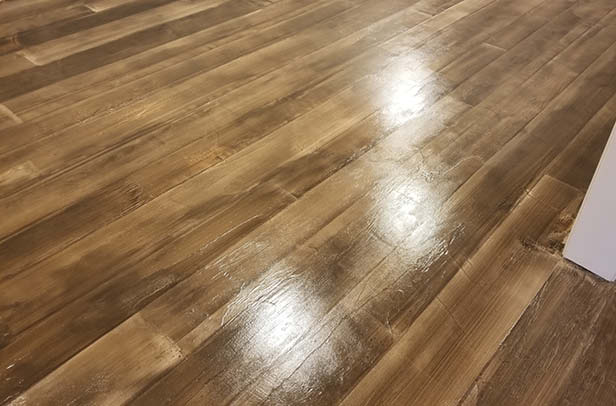 Brian Raub with Brinycrete Decorative Concrete in Lafayette, Indiana, appreciates the versatility of a microtopping, a product he uses to create both woodlook flooring and hand-carved flagstone patterns.

But most of his customers want the look of wood. He’s installed wood-look floors in living rooms, kitchens, bedrooms and especially basements, where people had their flooring ruined from floods. He appreciates the versatility of the microtoppings because the result looks 100 percent handmade.

“It’s not a flooring that you just go to the store and purchase,” Raub says. “It’s an artistic floor and we can make the microtopping look like whatever you want in whatever color you want.”